Do you love movies, particularly romantic comedies? They’re such a rich story-telling medium. But off the film sets, the people making those movies have their own lives and love stories.

Gossip magazines and entertainment news shows highlight the Hollywood celebrity culture, the glamour, the awards. Supporting the high profile people we hear about in the entertainment media are hardworking craftspersons who pour creativity and passion into creating on-screen magic.

The public sees the glitter, not the grit.

In my upcoming series Hollywood in Muskoka, the hero and/or heroine has a career in the film industry. I’ve been spending way too much time researching their jobs – director, screenwriter, producer, agent, cinematographer, actor, etc.

But I’ve come to realize that, while the screenwriter establishes the foundation story, the director holds the vision for its realization on screen, and actors’ performances make or break a film, a quality film crew is essential to the creation of a product that people will watch over, and over, and over again.

What Do You Want to Do On Set describes a few of these behind-the-scenes roles. Which job would you choose for a career?

Filmsourcing has a humorous approach to choosing a career in the business. Check out their decision flow chart below. 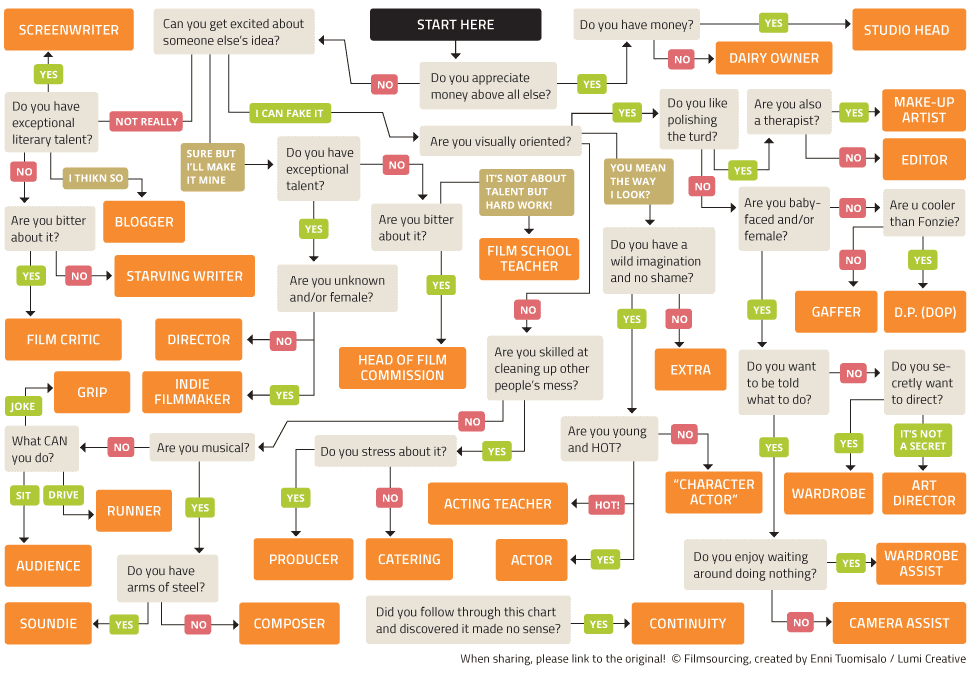 In the first book in my series, Caught on Camera, the plot revolves around a wedding in Muskoka, Canada’s premiere vacation destination. The wedding party includes a film lawyer, a producer, a stunt double, an ingénue actress, an agent and an aspiring cinematographer. The groom is the star of a blockbuster superhero franchise who decided to hold his wedding in Muskoka to escape the paparazzi.

I planned that each groomsman and bridesmaid will have his or her own story in subsequent books. Then a security guard, a personal assistant, and a makeup artist emerged from the background, waved at me, and insisted on finding love too!

Filmmaking Starts with a Screenplay

In addition to learning about filmmaking in general, I’ve intensively studied the elements of a good script. Authors, have you dreamed of seeing your story up on the big screen? By understanding the elements required in a visual and auditory storytelling medium, you’ll ensure those key concepts are in your novel. Hint: every word of dialogue, every action, every expression on a character’s face has to count. Your words must convey information on several levels.

Learn about the process of writing a script in FutureLearn’s FREE online course. The Introduction to Screenwriting course starts February 29, 2016. I’ve taken several of these UK-based courses and enjoyed every one. The time commitment is as little as an hour a week for three to six weeks, depending on the content.

Need an idea for a RomCom screenplay? Or a laugh? Filmsource used well-known movie plots to create a Romantic Comedy Generator.

This blog post was originally published on Romancing the Genres on February 9, 2016.

One comment on “Hollywood Falls in Love Off Set”