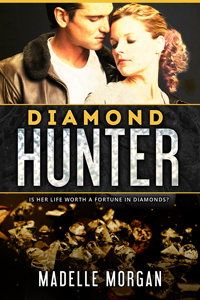 The hit song Summer Nights from the 1978 movie Grease is a favorite from my young adult years. Coincidentally (or not?) the hero in my romantic suspense is dark haired and wears a leather jacket, just like John Travolta’s character Danny Zuko. Sandy and Danny sing about how their “summer loving happened so fast” on YouTube.

Diamond Hunter’s hero and heroine fall in love while thrown together for a few hot July nights. However, the path to a happy ending is fraught with obstacles, including Seth’s adamant refusal to consider a future with Petra. It’s for her own safety. His job with the Diamond Protection Unit is dangerous.

No doubt you’ve read dozens of novels wherein a tough, intelligent cop teams with a psychic heroine to solve a crime. In a twist on that tried-and-true plot device, Seth Cooper, undercover as a pilot, has intuitive abilities. Seth doesn’t consider himself psychic or even believe such a talent exists, even though he says at one point:  “I have a bad feeling something’s going down, and soon.”

So how does Seth explain his gut feelings, a “knowing” that cannot be explained by evidence or deductive reasoning?

Seth’s hobby is drawing, but it has become an investigative tool. With charcoal pencils he automatically sketches details extracted from subconscious observation and impressions. Or so he believes.

Here’s an excerpt that introduces his talent:

Desirée Dumont intrigued Seth on many levels. “I’ve been telling Carter that I sketch people for my own amusement, and he suggested I draw you. What do you say?”

“Oh.” Her eyes darkened and she snapped to Carter. “Why do you suggest such a thing?”

“You’re so beautiful, poupée.” Carter pulled her onto his lap, where she balanced precariously. Desirée had six inches in height on him, easy. “I want a picture for when I’m off-site to remind me of you.”

“You took a photo already.”

Seth opened his sketch book. “Have a look-see, Desirée.” He flipped through the series of caricatures he’d drawn of some of the men he’d encountered on previous flights into Ptarmigan Lake. “These sketches aren’t ever going to end up in the Louvre, but you might find them amusing. Recognize any of these fellows?”

Desirée pulled Carter’s arms from around her waist and moved into the chair vacated by Petra. “They are what you call cartoons.”

“Yes. I find a distinctive feature and exaggerate it.”

“What would you exaggerate with me? I am so plain, so simple a woman.”

A knowing glance passed between the men. Seth cleared his throat. “I believe Carter might prefer an emphasis on your figure.”

He extracted the charcoal pencil from inside the coil binding and commenced drawing a few curved lines on a fresh page. A voluptuous hourglass torso clad in a skintight mini-uniform emerged under the pencil tip.

A musical laugh escaped Desirée’s lovely throat. “You are too kind.”

Seth’s art not only helps him solve crimes, it becomes the gateway to his and Petra’s happily ever after.

Are you a book reviewer?

Diamond Hunter is on NetGalley for the months of July and August. It’s available to reviewers for free upon request.

Have a wonderful summer!

This post was originally published on Romancing the Genres on 14 July 2015.

One comment on “Summer Loving, Had Me a Blast”